Doped up nurses and Hunter Thompson's doped up writing... 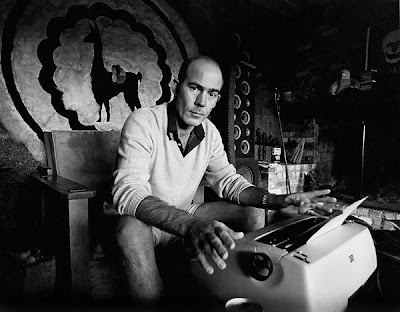 Joni is sleeping next to me here at the hospital. We've had a delightful evening, a rare night alone. Tomorrow we will get up and have a fancy breakfast at some wonderful Napa Valley restaurant and then return to our mud house and the dogs. The Workman's Comp NP promised to facilitate some injections for me---hustle them along. But I was put on Modified Duty. Seems to me if  you have a pulse, they want you to be on Modified Duty.

"Only the doctor can take you off of work---and an appointment with him takes a few weeks to arrange". This isn't even Government healthcare we are talking about here; Adventist Health runs its own worker's comp program.

And so they want this doped up nurse present in a hospital. If I showed up to work under the influence of these medications, I would be sent home and reported to the Nursing Board and probably end up in jail.

This is no longer a rational decision. This is about power. Time to write Human Resources.

Speaking of doped up, I just read Hunter Thompson's "The Shark Hunt". The last half of the book that comprises his political coverage of the early to mid 70's is amongst the best political writing ever laid down on paper. This is Gonzo Journalism at its best. This is where he created the best of Rolling Stone's stories. Hunter isn't scared to have an opinion. And he genuinely likes some of the politicians, including McGovern and Carter. Hunter puts himself in the story, talking about the junkets and the boring speeches and the dullness of covering a campaign. He talks about the true believer reporters who take the job so seriously (just watch any of the new snibblers on CNN to see what is meant by that---reporters like Brianna and Wolf and the being Out Front with that Erin person); they never quite figure out they are just nice teeth and courtesans of power. Hunter knew that and he wrote with elegance and humor. I don't care for his glorification of guns and drugs; I do like how he wrote about politics. Not many people come close to Hunter's style today. Maybe Matt Taibbi. There is room for someone who can write outside the lines of the general political reporter.
Posted by Allan Stellar at 10:47 PM