Some Words in Defense of Jesus... 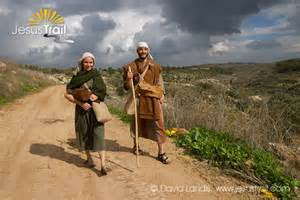 Drive around Paradise, California and you will see more churches than fast food restaurants, thrift stores, and pickup trucks combined. The churches are everywhere. The biggest one is called the "CMA", and it is monstrous. It is probably the biggest building in Paradise and is certainly in better repair than the high school that serves 1,200 students. The church is so big, they have their own gym. The parking lot is gigantic enough to host a farmers' market every Thursday with ample parking.

On the Church's website, spend some time poking through the sermons archive and you get a nauseating combination of self-help tripe combined with simplistic steps to take to solve any problem. It is a church for white families who own Chevy Tahoes. It's one of those popular churches that are in vogue for people who are lonely and find life without meaning. A meaningless, lonely life sucks and I don't think it is an awful thing to go to church to place a little salve on it.

What I do object to is the ostentatiousness of the Church. Turns my stomach. I'm not so certain that Jesus wouldn't be nauseated by the whole thing too.

I consider myself a Christian. Although I find most of the post resurrection stuff about Jesus as a work of fiction. Dead people do not become alive again. Atonement for sins is silly. I don't want anyone paying the price for my sins but me: I deserve it. It is called cause and effect. To me grace is just luck.

I don't believe Jesus was born of a virgin while three wise men followed a star to his cradle. That's a beautiful story, but it is a myth.

I don't believe Jesus rose from the dead. In fact, I doubt any body was ever recovered. Generally crucified people were fed to the dogs.

Every indication states he was a practitioner of non-violence. He resisted becoming a Che' Guevara to the Roman Occupation. That doesn't mean he didn't rebel against it: it was the Romans that ultimately killed him.

The stories in the gospels are thrilling. Some real; many fictional. What is real, I believe, are his humble upbringing, his healing, his wisdom, his charisma, his common meal, his devotion to service, his devotion to his God, his poverty, his travels by foot (he was a hiker), his act of civil disobedience in the Temple that led to his death.

He was a real man. Not some fictitious character that overcame death and lived as a god. Somehow that cheapens the story for me. A real Jesus, standing up to the temple, to the Romans, to the elites of the Temple who take in the donations and side entirely with empire---getting pissed off in the Temple, causing a demonstration and then dying a political death because of that: that is real. That is courage. That is worthy of worship. A man like that is worth following. That's not the man they worship at the CMA Paradise Alliance Church in Paradise.

So that's who I follow. I don't mind celebrating such a person's birth at this time of the year. Even if all the nativity sets have wise men there. Wise men and women will listen to this man's powerful story and, hopefully, emulate it.

And for hikers, there is a new "Jesus Trail" in Galilee that connects Jesus' two home towns: Nazareth and Capernaum. That's an adventure for the bucket list. 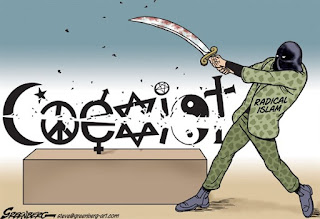 It is an easy way to talk about a brain-washing conversion process, that takes normal people, possibly weak-minded or with psychopathic traits, and turns them into monsters. And yet, nobody said the Planned Parenthood shooter was "radicalized". We seem to save the term for violent extremists, usually of the type that we love to hate. The process seems to be reserved for Islamists and Leftists.

The Islamic State is an awful thing. Don't get me wrong. Their methods of recruitment are ingenious and prey upon weak minds that are susceptible to evil. But I find it curious that we use this notion of becoming "radicalized" to describe the followers of the most repugnant political movement since Fascism.

Then there are the off the chart radicals, of the Left and the Right: you find them in the Anti-Vax Movement, or in the Libertarian tradition, in the Truthers and the Birthers. The kooks and the weirdoes.

I've heard Jesus called a "radical egalitarian" who practiced "radical non-violence". Would you say that his followers were "radicalized"?

We save the process of "radicalization" for those we hate. Mostly Leftists and Islamists.

Look at the Republican Party this year. Is there anybody out there saying that Donald Trump is "radicalizing" the party? After all, he is calling economic refugees "rapists" and calls for tracking and registering all Muslims in this country. How about the Tea Party? Do we say the local gun toting Obama Hater is a person who was radicalized? Why not?

Because we save the term for Leftists and Islamists.

Lenin said once: "Be as radical as reality". That's what real radicals try to do: Describe reality and complement that with a vision of something better. Radicals don't tinker; radicals create.

Ed Abbey almost single handedly created the Radical Environmental Movement. I fancy myself a Radical in many ways and I ascribe myself into a radical tradition that includes many thinkers that I admire. I find myself politically someplace between Ed Abbey and Che' Guevara.

We don't need to say "Radical Extremists" Just say violent Extremists. It is all in how you look at the use of violence, it isn't about your social criticism. We don't need to say the couple in San Bernardino were "radicalized". They were brainwashed into following a sick tradition that is willing to kill innocent people and abandon their own children.

Yes, we talk about the radical wings of both parties. It is a way of justifying the status quo. A radical critique is one that seeks truth. And it points to something better. Lenin (although certainly no saint) is right: reality is radical. And America has a fine Radical Tradition. A fine non-violent Radical Tradition. Let's not ruin that word.

Posted by Allan Stellar at 10:01 PM No comments: 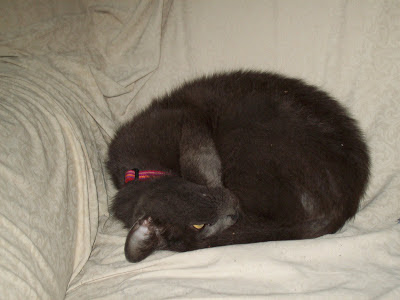 With all the senseless killing going on--Paris, Colorado Springs, San Bernardino---the death of one pet, on one homestead, in the middle of the woods, seems trivial. Unless it is your pet. Our 12 year old cat, Rocky, has been missing for four days. We fear the worst.

Rocky was a fantastic cat. Fiercely independent. He held his own with three very large dogs who tormented him daily. He spent his days and nights outside, coming to and fro through a cat door we built into the cobb of the house. I would spot him on my wildlife camera---sauntering along before the camera, sometimes just an hour or two before or after a coyote or a fox was in the area.

Rocky had grown more affectionate lately. Both Joni and I noticed it. On Sunday night, he slept on my lap as I sat in the Lazy Boy---something he almost never did. He was in good shape for being twelve, but Joni speculated that he knew his reflexes were slowing; eyesight not as keen; getting older. His increased affection lately makes me think that he wanted to say: "Thank you. Thanks for the good life. Thanks for letting me roam in these woods. For letting me be an outdoor/indoor cat. For inviting me into your lives."

Joni cried all day when Rocky didn't come home. I was at work, talking to clients about their troubles, yet I could barely listen. I was troubled by my dear cat being gone.

Joni and I have gotten older while living with Rocky. We were young when we got him. Now age and girth have caught up with me. I've grown slower too. And those predators are on my tail: the predators of the American Lifestyle, signified by an ever increasing A1C and an ever growing medication list. Sooner or later, the predators will get you. A lesson.

Kylie holds out hope that Rocky will return: "He is a mountain cat", she says. "He'll come back".

God bless Rocky. You are missed.
Posted by Allan Stellar at 10:11 PM 2 comments: