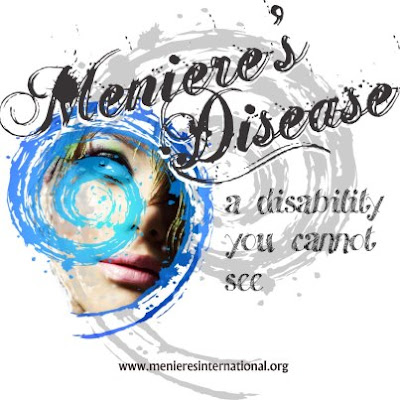 Two years ago in May, I was at work on the Psych Unit in St. Helena when things started to get a bit wobbly. I felt a weird, heavy sensation in my head, followed by a rushing noise in my ears, followed by a "spin". The world was spinning so fast, much like a Tilt-a-Whirl at a carnival, that I had a hard time walking. A kind colleague walked me down to the Emergency Room (where I did the psych evals) and helped me into a gurney. The doctor there said it was just "vertigo" caused by a recent cold that I had had. An inner ear disturbance. He gave me meclizine and told me to take a couple days off and rest. He got it partially right; it was inner ear related.

A couple months later, it happened again. And again after a couple more months. And so on.

I had started calling them "attacks", these vertigo spins. They lasted for up to two hours, but generally they are over after forty five minutes. Joni was concerned.

Then last April I had one while driving on a busy section of highway 99 about ten miles outside of Chico. This attack was a bit worse than all the others. Joni had to come rescue me (from 45 miles away) and the spin was still going. I fell into the van and endured the spin. She went to the grocery store while I continued to spin in the back of the van; when the spin just wouldn't subside, she took me to the Emergency Room. In the Emergency Room waiting area, the spin continued and I started to vomit.

I was hospitalized for the weekend.

They ruled out a stroke and a heart attack. But I didn't get the diagnosis until I saw an Ear, Nose and Throat MD a week after the hospitalization.

I have Meniere's Disease. It sucks.

Meniere's Disease is a disturbance of the inner ear where, they think, the fluid builds up over time and then bursts, causing the motion center of the ear to become unstable. The result is the classic "spin" or "vertigo attack". The attacks last for an hour or two and, unfortunately, affect your hearing. Hearing loss to the point of deafness is not uncommon.

Meniere's Disease has three components: Tinnitus (ringing in your ears); vertigo attacks; and hearing loss. Nobody really knows what causes it. Once you have it, you have a life-long chronic illness. There is no cure.

I've always had Tinnitus. I always thought it was from playing music too loud in my teenaged years. I liked my Beatles and Larry Norman to be played at rock concert decibel levels. That certainly could be the case, but, more than likely, the tinnitus has been a prodromal symptom of my Meniere's Disease.

I continued to have attacks over the next nine months. They started to get more frequent, and I started to fear for my safety while driving. I drive about six to eight hundred miles a week for my job. I get about a minute's warning with the heavy head sensation and the weird feeling and the whoosh in my ears that an attack is imminent. Once the attack happens, I am helpless for the next hour or two. So that gives me about a minute to find a safe place to park the car and ride out the spin. I started to carry a lounge chair in the trunk of my car so that I could set it up and ride out the vertigo. I carry meclizine (motion sickness pills) at all times. After an attack, I am exhausted and generally need to sleep for the rest of the day.

With attacks starting to happen every two weeks or so, I finally got around to getting serious about this disease. Disability seemed like more than a possibility. A car accident certainly seemed within the realm of possibility too.

I got serious about my salt intake. Turns out there is salt in everything. Eating out isn't possible anymore. I try to keep my sodium intake to be under 1,500 milligrams a day. A quarter pounder from McDonald's has 1,200 milligrams of sodium in it.

Over the last two years of "attacks", I've come to realize they happen towards the end of the day at the end of the week. The attacks seem to be triggered by, what I call, the THREE S's:  Sleep (or lack thereof); Salt (too much); and Stress (too much). If you have Meniere's, you have to get lots of sleep, give up salt and reduce/manage your stress. Yeah, right.

I ordered a half dozen books on Meniere's and did my research. It is a relatively obscure disease and the literature out there tends to be self-published by those of us who have the disease. Around 40,000 people are diagnosed every year in the US with Meniere's. I'm one of the unlucky members of the class of 2015.

After reading the books, I discovered that you need to go a bit farther than just eliminating salt, getting sleep and reducing stress. In order to reduce the number of attacks, you also have to give up CAFFEINE, NICOTINE and ALCOHOL. Nicotine isn't a problem, but giving up coffee? Beer? Wine? Scotch? Is there anything left to live for?

So I got serious in January. A couple of the books suggested that after you get a diagnosis of Meniere's, you should take two years off from work to learn how to manage the disease. Must be Trustfunders, because I need money or I will end up sleeping under a bridge. But I did start to get serious about this illness. There's plenty of incentive. Can you imagine living without music? Hearing birds? Hearing the squabble of children? I'm not interested in becoming deaf.

So I greatly reduced the caffeine and pretty much gave up alcohol. I had a couple beers on my birthday at the Sierra Nevada Brewery and a couple glasses of wine about a month before that---and that's it. Caffeine I have pretty much given up except a latte' as a treat now and then.

As I write this, I haven't had a Meniere's Attack since January 28. That's 57 days. With any luck, I hope I'm on my way to managing this disease. It ain't fun. I'd love to have a potato chip. Just one. I'd love to have French fries with salt on them. But I can't. I like listening to Abbey Road too much to jeopardize that by eating a potato chip.

But oh, to have a glass of Scotch every night before bed in the winter, like I used to. Forced into sobriety, I am. It ain't all that bad. And with any luck, as I learn to manage this illness, I might be able to have a potato chip or a glass of Scotch now and then. I am learning to practice Extreme Moderation.

57 days and counting without a spin. I can't tell you how exciting that is for me. 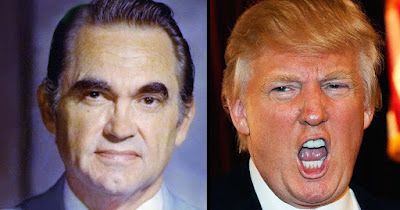 Both George Wallace and Donald Trump exploded their political careers into the national spotlight by focusing on race and walls. Race: George through Segregation; Donald through Birtherism. As for walls: Wallace barricaded the halls of a University to stop Black students from opportunity; Trump through his outlandish claim to build a wall on the border (and end opportunity for poor Hispanics).

Wallace and Trump were both populists. They both tried (and try) to appeal beyond race. But race is what they will both be remembered for. And the racial insults of Donald Trump automatically disqualifies him from being a serious presidential candidate.

Both Wallace and Trump could entice and entertain. Here is Gonzo Journalist Hunter Thompson writing in 1972 about Wallace when HST interviewed a Polish factory worker:

"This guy is the real thing" one of them said. "I never cared anything about politics before, but Wallace ain't the same as the others. He doesn't sneak around the bush. He just comes right out and says it".

Thompson goes on to write about a Wallace rally:

"It was the first time I'd ever seen Wallace in person. There were no seats in the hall; everybody was standing. The air was electric even before he started talking, and by the time he was five or six minutes into his spiel, I had a sense that the bastard had levitated himself and was hovering over us. It reminded me of a Janis Joplin concert. Anybody who doubts the Wallace appeal should go out and catch his act sometime."

There are a lot of George Wallace's political genes in Donald Trump. They are both populist racists separated only by 50 years of history. They both represent the worst, most awful, political impulse the American people are capable of. Yes, there are some good things in Trump's program: his critique of exporting jobs to other countries and his opposition to TPP. Even the devil has good qualities. But when you boil Trump down to his basic essence, you find the stench of racism. 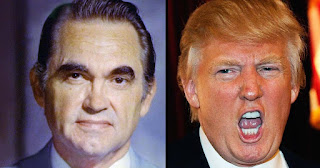 Posted by Allan Stellar at 2:52 PM No comments: