Ammon Bundy, Joni and Me... 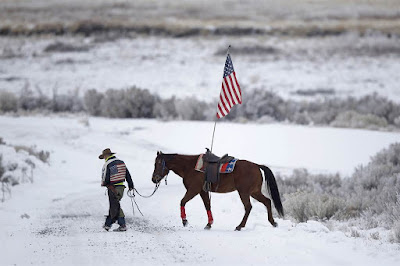 The government's response to the Right Wing Occupiers up in Oregon, where disgruntled Yeehawistas have taken over a bird refuge, is quite underwhelming. Whereas it is reported that the Bundy clan and other armed, anti-government cowboys aren't well liked by the locals, I have seen photos of the local sheriff shaking hands with the lead Bundy, Ammon--even offering  him safe passage out of the state.

No SWAT team has been deployed. No National Guard. Where are they?

I had my own little Occupation a couple years ago. When the government closed down Lassen National Park, I climbed Mount Harkness within the Park's boundary ignoring the park's closure order. I did it to write a story about for the CNR about Ed Abbey, as he completed his seminal work, Desert Solitaire, in the Mount Harkness fire tower back in 1967. If you ever get the chance to be the only person in a national park, I suggest you take advantage of the situation. It was glorious.

The Lassen National Park Rangers didn't take my silly little occupation lightly: they dispatched a Ranger, on the government dime, to drive 5 hours round trip to drive to my home in order to give me a ticket for illegal camping and refusing to obey a park closure rule. I had to pay two hundred fifty dollars.

A year before that, I had a Modoc County sheriff threaten to arrest me for simply trying to cover an illegal coyote hunt on federal land up in Aiden, California. He even threatened to throw my 12 year-old granddaughter in jail for trying to buy a soda.

My spouse had her own Occupation of federal land. Back in 1992, the forest service was going to allow logging on a huge grove of 500 year old Englemann spruce in Colorado's South San Juan National Forest. The trees were located at 9,000 feet; a replacement stand of trees would take hundreds of years to reach any considerable size. Joni didn't care much for this, so she climbed a tree and zipped around the tree canopy, frustrating logging attempts and holding back the operation for a few days. The forest service brought in a SWAT team, armed with automatic weapons and night vision goggles, to apprehend one tree sitter (my wife) and break up a small support encampment of a dozen hippies with bongos. Joni ended up going to prison for a month.

Both Joni and I have gotten more severe penalties from the government for our lowly occupations than the armed Oath Keeper's and the Bundy's have received thus far. But then again, Joni and I are left wing, unarmed enviros, the sorts of people the government has no problem arresting and ticketing. We must be dangerous people.

Let's hope Ammon Bundy has to pay a fine of at least $250. Actually, I hope they send him to jail for a long, long time. The birds deserve that. 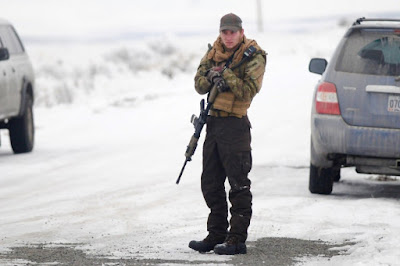