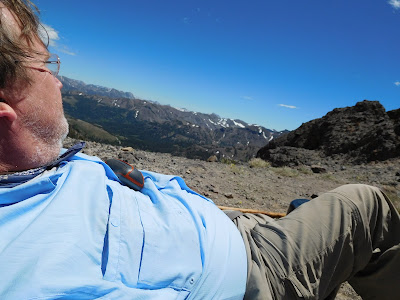 The plan was to spend 12 days on the trail. Turned out to be 5. Lack of preparation, being out of shape, altitude and, for the youngster amongst us, an unstable detox from electronics.

Sonora Pass starts at 9,600 feet. Just a month ago, it was very dangerous to hike here due to the snow on the shoots. Some snow remained for us, enough to give a sense of adventure. Yes, it was a little dangerous in places.

But that's what the trail is for. Danger! Adventure! The trail is the perfect antidote for all the absurdities of modern living. All those little and major crises: job, family, failure, success, stress---all problems recede when boot hits the trail. Worried about divorce? Hard to worry too much when you are hauling a 50 pound pack up a steep trail in altitude. Out of shape I am----at times reduced on the first climb to taking ten steps, stopping, resting, taking ten steps, stopping, resting, repeating the whole process for a few  hours.

"We can always hitch to town and spend our vacation driving", my son said as he watched me heave and breathe.

And I do. No matter how out of shape. Or how much suffering is being endured. Of course, the trail is best enjoyed while in good physical conditioning. Been awhile since that's been the case with me.

We had planned to do eight to nine miles the first day. We settled for five when we found a really nice camp site. A pattern began then: First I'd lie on my pack for about an hour. Then I would set up my tent, get inside, and rest. It was five pm. Time for bed.

The altitude made me nauseous. No dinner. We tried to cook up one of those dehydrated meals but it was unpalatable and we flushed it down the stream. That started a five day pattern of no appetite.

Back to my tent. About six. My 30 year old son wasn't quite used to such hours. He is a computer programmer and spends more time in the unreal cyber world then the real world. The reality of breeze and sunlight, leaves and views takes a bit getting used to when you'd spent much of the last week chasing Pokémon. 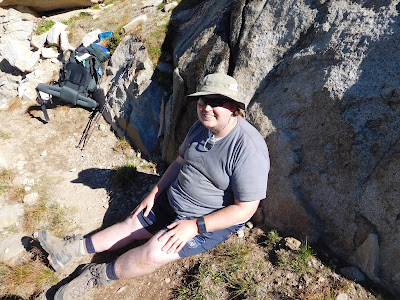 He got used to seeing the stars though, something he doesn't get to experienced in the overly urbanized world of the megacities of the East Coast.

Ah, wilderness. Home on the PCT.

Posted by Allan Stellar at 8:23 PM No comments: