Tale of Two Weathermen or The Blair Watts Project 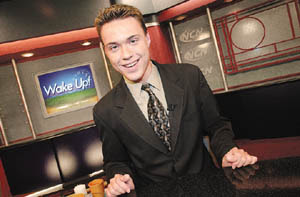 Chico, California has two of the strangest weathermen ever to make a forecast in the United States. And one of them just lost his job. Rob Blair is a boyish weatherman who also shares early morning duty on one of the daily local  TV shows. I've only seen him operate a couple of times (mornings are not my thing); he is hokey and friendly. A bit effeminate. Ridiculously popular. A new company bought the local television station and Rob Blair was not rehired to do his duties. Part of the lack of a rehire might stem from a very short Vegas gig Blair had in 2005. This was Blair's step up from Chico to the much larger Las Vegas market. His big chance. This is what happened:

"Jim Prather, vice president and general manager of KTNV, said Blair "stumbled" during a weather update at 7:55 a.m. Saturday but added that "this kind of incident is not acceptable under any circumstances, and I'm truly sorry that this event occurred."

"Blair was delivering the extended forecast when he said, "For tomorrow, 60 degrees, Martin Luther Coon King Jr. Day, gonna see some temperatures in the mid-60s." About 20 minutes later, Blair told viewers at the ABC affiliate, "Apparently I accidentally said Martin Luther Kong Jr., which I apologize about -- slip of the tongue." He offered a full apology during Saturday's 6 p.m. and 11 p.m. newscasts.At 6:11 p.m., co-anchor Christina Brown, who is black, announced, "Right now we want to pause for a program note. Rob?"

"Blair, seated at the news desk with co-anchors Brown and Shawn Boyd, said, "On a weather report earlier this morning, I made an accidental slip of the tongue when talking about the Martin Luther King holiday, and what I said was interpreted by many viewers as highly offensive. For that I offer my deepest apology. I in no way intended to offend anyone. I'm very sorry."

After a couple of years of penance where Rob attempted counseling psychology and grew closer to the Lord, Blair was invited back to Chico where he had been, and still is, immensely popular. Redemption for the Kentucky born, gay man. 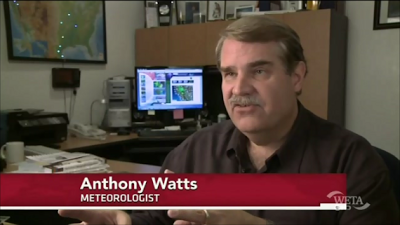 Chico is also home to the infamous Anthony Watts. Anthony was a television weatherman who later took a job at the local Fascist radio station: KPAY. No self respecting television station would have such a controversial weatherman as Anthony Watts. In addition to his weatherman duties at KPAY, Watts writes the climate denier blog: Watts Up With That or WUWT. Others have called it LOLWUWT.

Watts, who has received money from the petroleum front group: the Heartland Institute, claims to have the most visited climate change web page on the Internet. His website attempts to be somewhat scientifically detached. His Facebook page isn't detached. Watts lets his Right Wing Freak Flag fly there. I encourage you to friend him. It is an eye opening experience.

I've had a few arguments with Watts who posts openly disgusting Tea Party, anti-Obama propaganda on his Facebook page. I've been banned from the page when I called him on a particularly nasty post that made a double entendre, racist reference to Obama (this seems to be a theme amongst Chico weathermen). I did write the radio station regarding Watts Facebook post and I did notice that Anthony pulled the offending photo from his stream. Score a point for decency.

Except that I'm no longer welcome there. Yet another theme amongst the northern California Right Wingers.

Posted by Allan Stellar at 8:55 PM